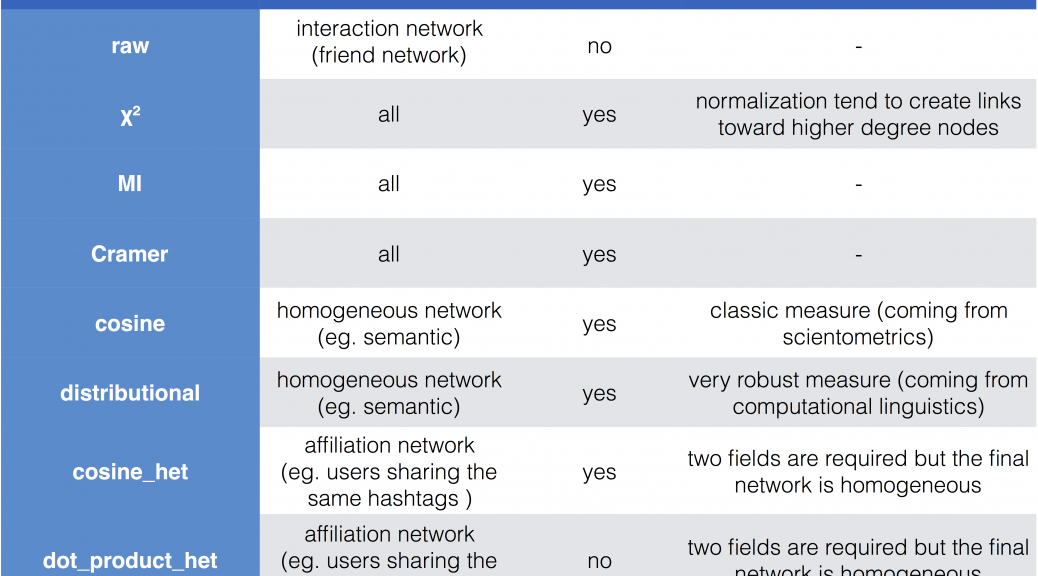 This page describes the parameters regarding the edges of the maps in the mapping script.

Usually a standard strategy is to choose direct measures like chi2 for heterogeneous network  and indirect measure like distributional measure (or cosine more classically)  for homogeneous networks. This is the default behavior of the script if you don’t specify any metrics at this step.

Raw measure is also useful when one does not want to affect the original co-occurrences statistics, for example when plotting a collaboration network.

Heterogeneous measures (with the “het” suffix) allow the production of affiliation networks made of nodes from the first field only, whose proximity is computed by comparing their profile according to the second field. The scalar product or the cosine measure is then used to provide networks such as authors connected when sharing the same research interests.

A more thorough and technical explanation of the metrics are available on the metrics page. 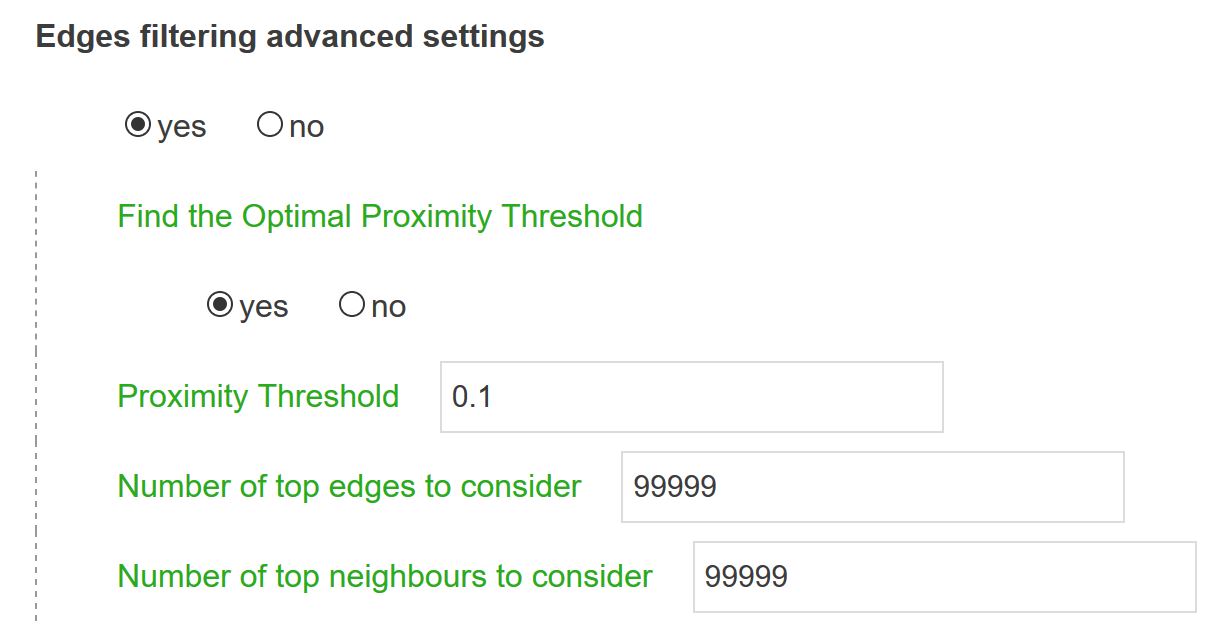 An important step when producing a network map is to carefully define the filtering steps. Edges of the weighted network (the weight being equal to proximities between nodes) should be filtered in order to get rid of insignificant edges that may make it difficult for users to visualize its most significant features. Three possibilities are offered: (i) exclude any link whose weight is below the distance threshold, (ii) only select the N most significant edges (top edges according to their weight), (iii) only select the N edges connected to the closest neighbours of each node in the network (top neighbours).

With Find the Optimal Proximity Threshold on yes (default value) CorText Manager uses a strategy (from the percolation theory) to determine automatically for users a threshold where: just before, the network is divided in subcomponents (unliked partitions of the graph) and, just after, nodes of network are more widely linked to the other nodes. So, this strategy tends to minimize the number of links while conserving the overall connectiveness of the network.

If users want to change this behaviour, choose no for Find the Optimal Proximity Threshold, and change the Proximity Threshold parameter. One should also keep in mind that direct measure cannot be below 0 but have no upper values (except for cramer distance always below 1) and that indirect proximity measures are comprised between 0 and 1.

Number of top neighbours to consider

Although users are free to define their own strategy when filtering, a simple rule of thumb is to focus on top neighbours filtering with indirect measures and distance threshold or top edges filtering with direct measures. In an adjacent matrix based on a RAW frequency, a top 3 neighbours of a given node A, means that are selected only the 3 highest values for the nodes of the networks linked to the node A (e.g. nodes B, C, D). But nodes A can be in the top 3 neighbours list of other nodes of the network (e.g. nodes E and F), so have in total more than 3 edges. In this example, E and F nodes are not in the top 3 edges list of A, but A is in the top 3 edges list of E and F… Selecting the Number of top neighbours to consider, is a strategy that keep what matters locally for each node, by preserving a certain degree of the overall network structure (useful, for example, to directly catch how intense are the relations in a coauthorship network or in a collaboration network between metropolitan areas…). 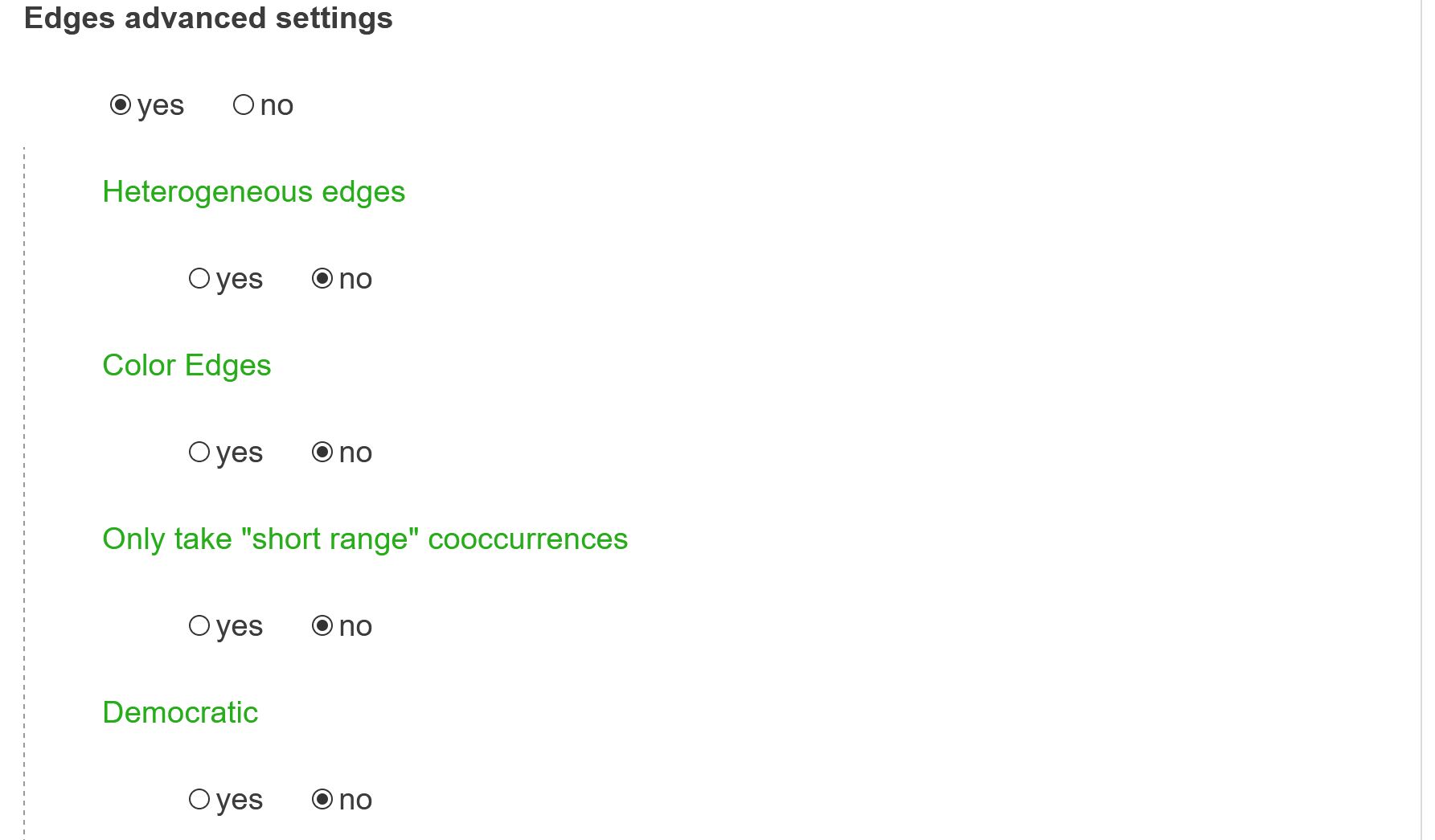 If your network is heterogeneous, do you want to consider every types of edges (choice: yes) or only edges connecting field 1 nodes to field 2 nodes (choice: no).

Edges will be colored according to the color of the node.

This parameter allows you to control the range over which a co-occurrence is valid. It is especially useful when producing semantic maps of long documents. By default every joint appearance of two words in a record shall be considered as a co-occurrent event even if the two words are very far apart. If one activates the short-range option, when it is possible to define the maximum number of separating sentences between two words should be used to  consider the cooccurrences event to be significant. Classically, 5 to 10 sentences seems a reasonable value. Additionally, use the context decay speed, if you wish to weight the effect of co-occurence by a factor inversely proportional to the distance (still in number of sentences) between two words.

This last option is still experimental. By default, for each document, a group is built connecting every pair of entities. For instance, author co-occurrence matrix will index collaboration between each pair of co-authors. It seems a reasonable assumption, but one may be tempted not to give too much importance to very large events gathering dozens or even hundreds of authors compared to smaller events. Put differently, by default, two people collaborating in a very large team have the same weight in the final map than two people working on their own. This option alleviates this effect and guarantees that each article have the same contribution to the final map.