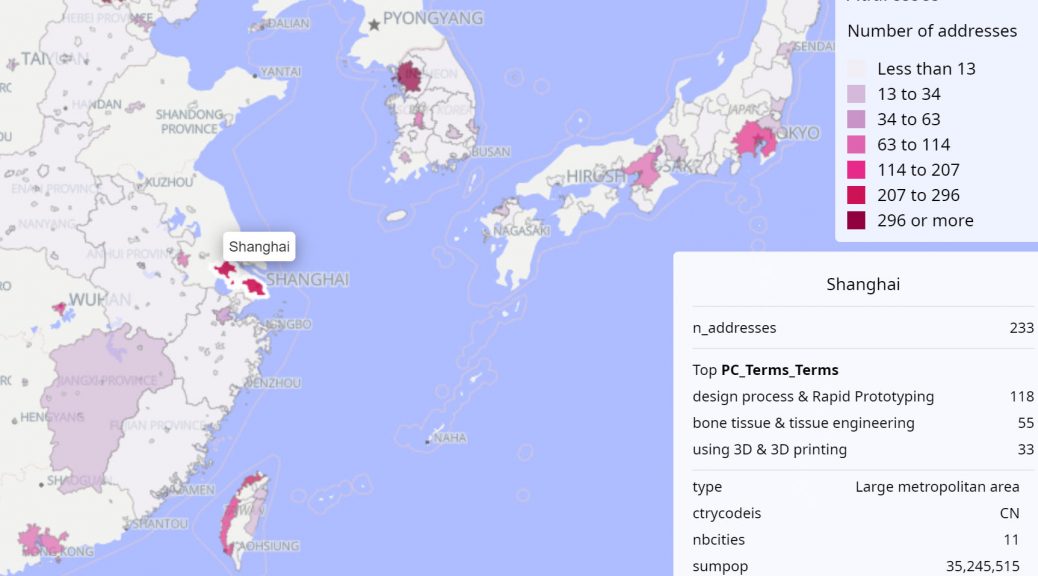 Geographical phenomena are by nature distributed. To deliver geographical coordinate to an address is one thing, but for the purpose of spatial analysis it is often necessary to aggregate geographical information, and associated data, on a more suitable scale. It is the case, for example, for analysing inter-urban or regional spatial dynamics based on human activities.

This aggregation, in a given area, of geographical points of different nature (organization name, building name, street number, city name …) located at different scales (points or centroids) is called a geospatial join. It consists for each point (couple of coordinates) to identify the shape (as a city or a region: multiple points with coordinates linked by lines) to which it belongs. Once this shape is identified, and all the points listed, it is possible: 1- to calculate and visualize the distribution of the phenomenon across these areas, 2- as well as to associate other variables already stored in your datasets (thematic clusters, keywords …).

A common question raised by this operation, is the choice of relevant boundaries. In many studies the national administrative boundaries are chosen. These approaches face two major issues:

To answer these two classes of problems, several remarkable attempts exist. The NUTS (EUROSTAT, 2008) has enabled intercountry comparisons in Europe, by harmonizing population per shape. With the Functional Urban Areas (Brezzi, 2012; OECD, 2012) OECD proposes to identify urban areas based on a core dense space (inhabitants’ density) with in addition areas that functionally depend on it (using commuting data). Other initiatives are moving away from administrative boundaries to rely only on the internal dynamics of the data studied by proposing, for example, endogenous geographical clusters. This enables both to have a global coverage and to no longer suffer to socio-spatial discontinuities as, in these cases, only the spatial concentration of the phenomena studied matters. Applied to the world science production, 80% of the activities is located in less than 500 urban areas. NETSCITY enable to locate bibliographic records of scientific articles within these areas, where close cities have been clustered (Maisonobe, Jégou, & Eckert, 2018; Maisonobe, Jégou, Yakimovich, & Cabanac, 2019). In a more disaggregated manner: addresses are widely distributed across geographical space. Using a density-based algorithm helps to identify areas where the activities are concentrated (Villard & Laredo, 2016; Villard & Revollo, 2015).

The CorText Geospatial Exploration Tool offers an original way to solve this, by combining in one unique tool a large variety of well-established sources of shapes. The present service proposes basemaps at four different scales:

Geospatial Exploration CorText Tool is designed to work after CorText Geocoding script as it needs coordinates (longitude, latitude) in a specific format (e.g. 104.068108|30.652751 for longitude|latitude).

The urban areas have been built based on several sources of information:

These 4,200 urban areas have been combined in one layer (see “modifications made on URA” section to know how they have been cleaned). 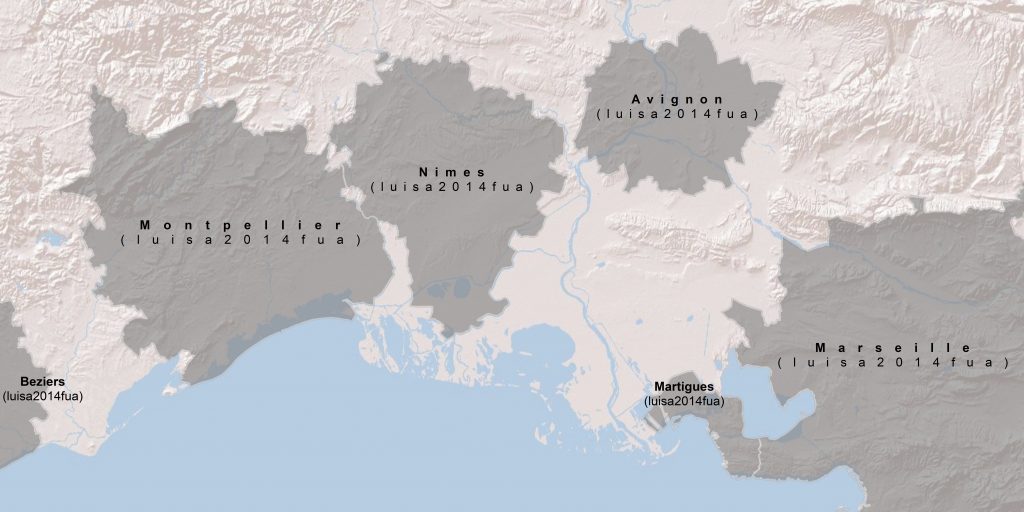 Be aware that inter-sources comparisons might suffer of a lack of consistency. As different methods have been used to produce the different types of urban areas, the average surface vary (e.g. between functional urban areas and urban areas from dense light zones). Nevertheless, this is a useful and original way to aggregate locations (addresses, cities…) that are next to a core dense urban center, and to reduce drastically the geographical spread of the data with a worldwide approach.

To conduce analyses outside urban areas, we have added a regional layer published by Natural Earth (Patterson & Vaughn Kelso, 2014). This layer gathers “first-order administrative boundaries and polygons for all but a few tiny countries. It includes name attributes (including diacritical marks), name variants, and some statistical codes (FIPS, ISO, HASC)”. It corresponds to the country regional scale (state, province, prefecture, department…).
These new entities have been built to fill portions of geographical space which are outside urban areas. Consequently, urban areas can overlap two or more original administrative boundaries from the regional shapes, and they can cross countries borders. Regional shapes can completely disappear in favor of the corresponding urban areas, when they are wider. 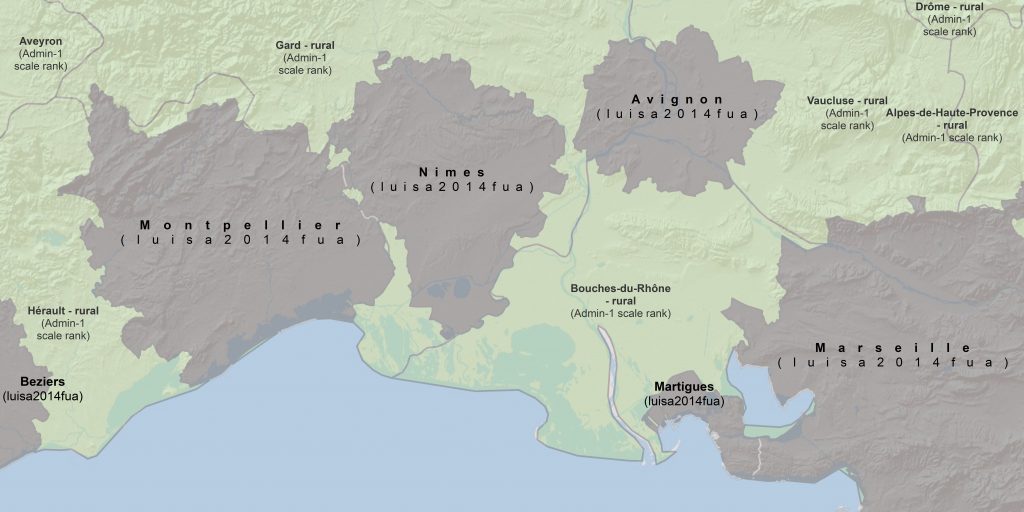 Following the classification proposed by OECD for FUA, urban areas are classified based on their population. In order to apply this classification to all the areas, whatever they are rural or urban, 349,202 cities from GeoNames (GeoNames, 2018) with at least 10 inhabitants have been studied. Estimated population is summed across the urban or rural areas: 80% of the number of inhabitants has been added to GeoNames between 2012 and 2015 (and the first entry is from 2006). Based on this estimation, we have finally kept only urban areas with more than 50,000 inhabitants. A new class for rural areas below this threshold has been added. Our full classification is the following:

Toponym names from GeoNames have been used to name urban areas, by selecting the English name of most populated place in the area. The names of the rural areas remain the names provided by the original sources.

A suffix ” – rural” is added to the label name for rural areas which have a portion of their territories covers by an urban area (e.g. Gard – rural). At the opposite, a rural area without the suffix corresponds exactly to the shape in the original source (e.g. Aveyron).

Modifications made on URA and added variables

When merging several geographical sources of information, numerous problems might occur. Many modifications have been made to improve the overall quality of the URA layer:

Whatever the layer is, some extra variables have been calculated in order to enable further works. These variables might be also useful to link areas to the original data source. Here is the list that all the layers share: name of the areas, name of the source, ID in the source, centroid of the shape to enable further network calculations (longitude and latitude of the centroid), estimated population which is used for density calculation into the maps (see above for the method used with GeoNames), surface of the areas in square kilometres (used for the density calculation into the maps).

The first step is to select which field contains the geographical coordinates (Use a custom longitude|latitude field). This field is produced by CorText Geocoding service as geo_longitude_latitude which is selected by default. 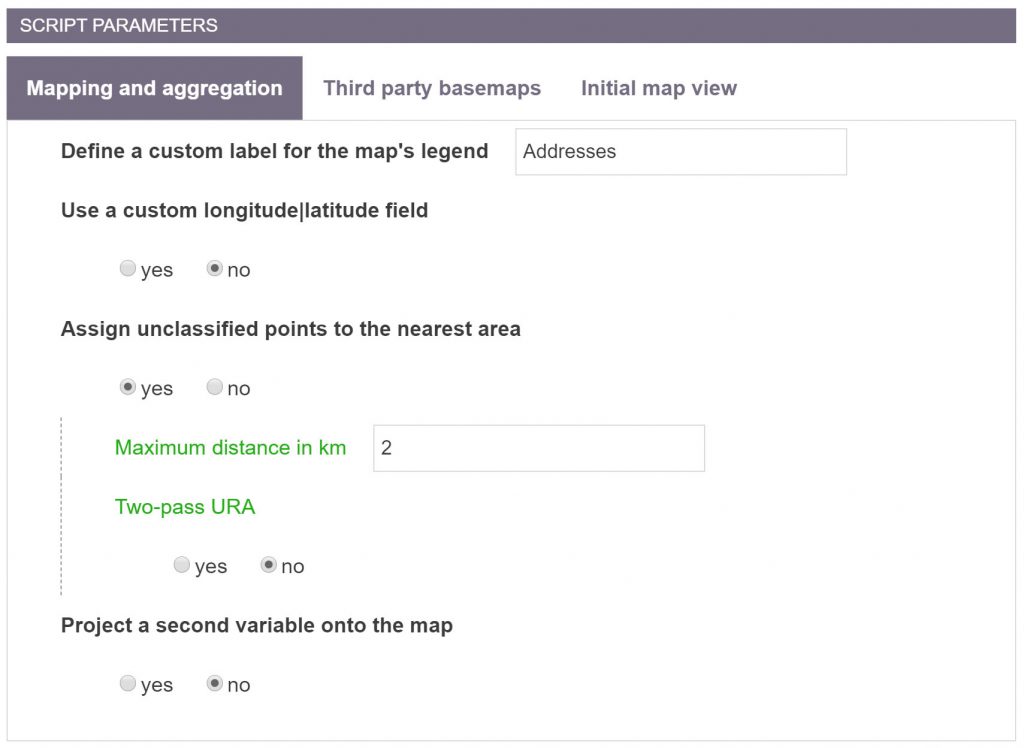 CorText GeoSpatial Exploration tool uses shapes with a high level of precision: from 10 meters to 5 kilometers depending the layer and the source. For geographical space: distance matters! So, on one hand, at this level of precision a geocoded address may not fall into the shape for a small distance (as for an address in a park, next to a river or in a port, in an island… excluded from the urban areas). On the other hand, an address which is close to a boarder, may fall outside the right shape for only a few meters due to some simplification of the boundaries.

If you want to avoid these situations, you may choose the parameter Assign unclassified points to the nearest area. If yes (which is the default behaviour), CorText Manager will look for each outlier point (geocoded address), in a given perimeter (by default 2 km), which are the closest centroids of shapes (urban or rural areas, regions…). After having selected the three closest centroids, CorText Manager will identify for the outlier which is the closest boundary between the three shapes selected by their centroids. Finally, the point will be affected to this area.

By default the outlier points will be attributed to the nearest area found, whatever if it is a urban area or a rural area. For the URA layer, if Two-pass URA is selected as Yes, the spatial join will proceed first with urban areas only, and finding the nearest point (geocoded address) in a given perimeter, and secondly with rural areas for the remaining points. This parameter creates a buffer zone around the urban areas of a specific distance (2 km if using the default value). It aggregates locations (geocoded addresses) with the urban areas if they are close to it, even if they would have fall in a rural area.

If Project a second variable onto the map is selected, a given field is used to tag the shapes with the Top N elements. It could be useful for semantic clusters, or to draw profiles with classes for regions or urban and rural areas. This parameter enriches the legend of a map with this Top N elements and produces a csv file for each layer.

Interactions with the choropleth maps

Several interactions are accessible to explore the data in different ways.

Two methods are accessible to classify the values projected onto the maps :

Due to the precision of the layers, it would have been too heavy to load it into a browser. The full layers are used for the geospatial join (to ensure the highest possible accuracy), but the shapes visualized onto maps have been widely simplified. We have used the Douglas-peucker algorithm (Douglas Thomas K., 1973) to reduce the number of points of the shapes’ boundaries. Up to 90% of the points (in some portions of the URA layer) have been removed and replaced by lines, with two constraints that the algorithm should follow:

You may want to do further work with the maps outside CorText Manager: you can export the maps in geojson format. Keep in mind the layers and shapes you will download are the one which have been simplified. Furthermore, only shapes with a value are mapped. So,built you will gather and download in the exported geojson file only shapes where at least one point from your dataset have been projected. Please ask us if you want the precise version of URA layer with all shapes.

Following the same methodological steps and parameters, you can add one extra basemap.

This added basemap may be particularly useful depending needs and data coverage.

Section to expand with your comments.

This example uses a 3D printing dataset with all scientific publications published in a given time period. 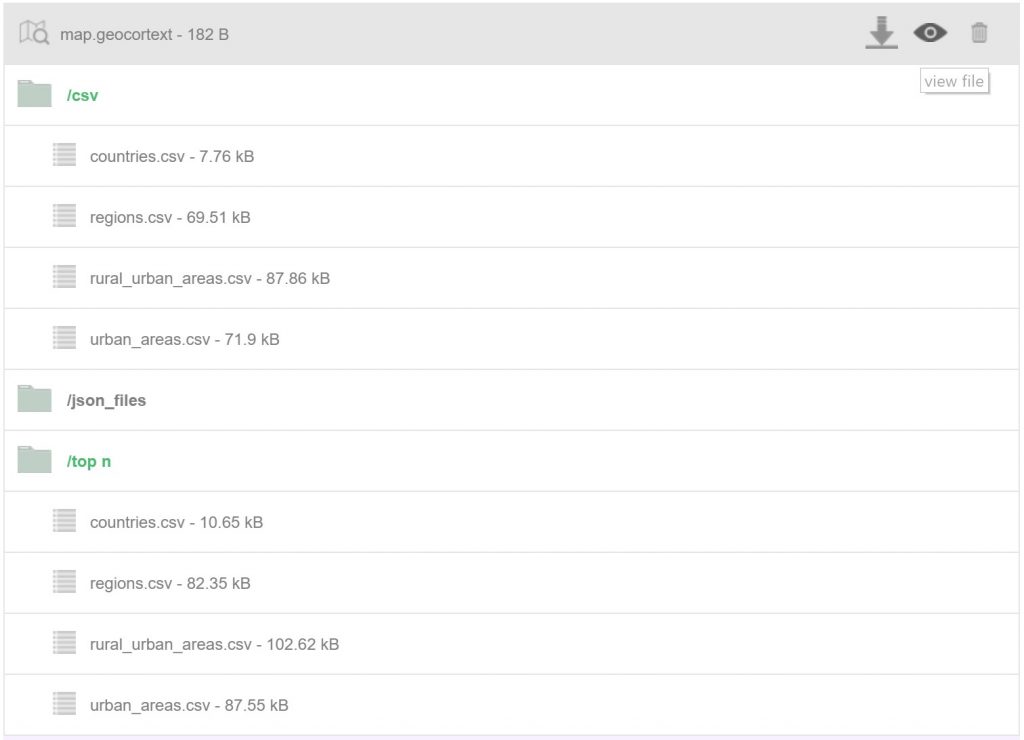 And enjoy your maps ! 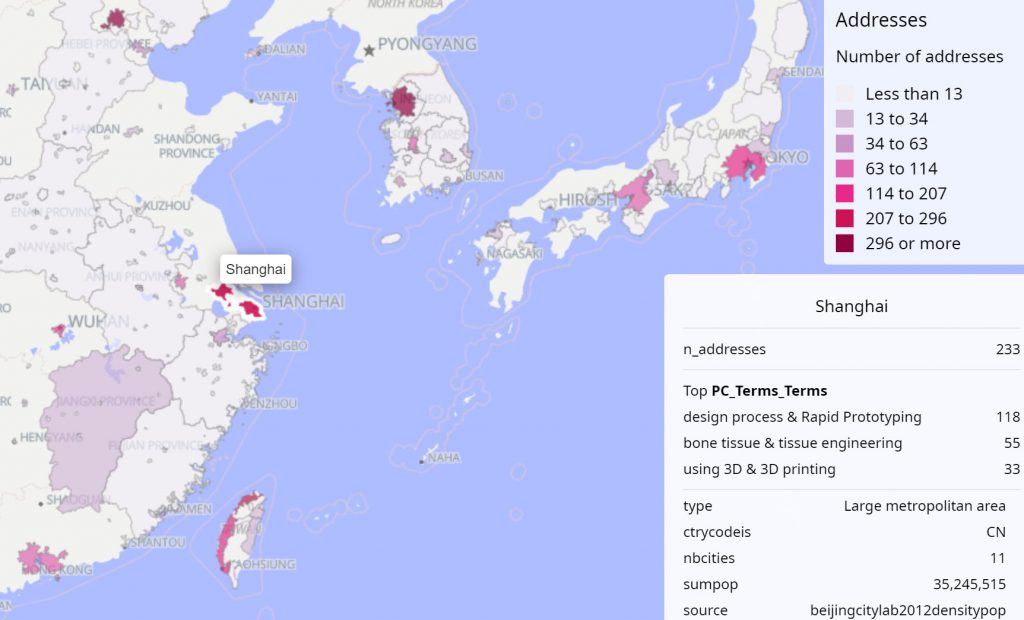 Pay attention that, depending on the section of the map studied, you will need to cite the related work. The source of the urban and rural areas, with their original IDs, is kept in the data provided by CorText Manager in order to make you able to cite them properly.

To add extra-variables in CorText Manager on top of the URA (see: corpus list indexer) or to explore the full list of URA, you may what to download the file below. It includes also, for each shape, the full list of references you should cite.

Douglas Thomas K., D. H. and P. (1973). Algorithms for the Reduction of the Number of Points Required to Represent a Digitized Line or Its Caricature. Canadian Cartographer, 10(2).

EUROSTAT. (2008). Nomenclature of Territorial Units for Statistics. Retrieved from http://epp.eurostat.ec.europa.eu/portal/page/portal/nuts_nomenclature/introduction

Villard, L., & Laredo, P. (2016). Agglomeration and collaboration in knowledge absorptive capacities in emerging science and technologies: the case of nanosciences and technologies. In 3rd Geography of Innovation Conference. Toulouse.

Refer to this work

This set of methods have been funded by the European Union under Horizon2020 Research and Innovation Programme RISIS².

If you have found the tool and results useful, we would be grateful is you would refer to this work by citing it in your own documents or publications: