In digitalized documents, especially those with texts, more than 70% contains geographical information. Nevertheless, a large proportion of this information are not formalized to be projected and manipulated on maps, and there are stored in various forms (Hill, 2006): pictures of places, toponyms in full text documents, addresses, structured metadata or, finally, geographical coordinates. Adding a layer of geographical information in an understandable way for computational treatments is a vast research field (since the 1980s), which has produced different set of methods: Geotagging, Geolocation, Georeferencing, Toponyms detection in full text, and Geocoding.

We are focusing, here, on geocoding. But in Cortext Manager, you are also able to extract toponyms with Name Recognition Entities script  (identification of toponyms with GPE), which is a Natural Language Processing method based on language rules, with the use of contextual information to disambiguate toponyms. The two scripts can work one (NRE with toponyms extraction) after the other (Geocoding addresses).

The CorText geocoding engine has been built to manipulate semi-structured addresses written by humans. So, it is able to solve complex situations as:

The typical steps needed to move from raw addresses related to documents/objects to coordinates (longitude and latitude) are:

Classifying elements contained in an address

First, the tool is doing pre-processing step to do some cleaning and normalisation of the addresses (simplification of the punctuation, aliases and normalising the country names…).

Secondly, to classify elements in the address, the CorText Manager is using LibPostal (Barrentine, 2016): an address parser and normalizer, which is a multilingual, open source, Natural Language Processing based engine, to classify geographical elements in worldwide street addresses. LibPostal has been trained on OpenStreetMap. Libpostal is able to classify objects as: house, building name, near (e.g. “near New York”), level in a building, street number, postal codes, suburb, city, island, state and state district, region, country…

Matching the classified elements with the reference geo-databases

The second tool used by CorText geocoding engine is Pelias, a modular, open-source geocoder built on top of ElasticSearch. 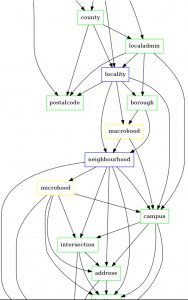 To guess which location (couple of coordinates) is the most probable for a given address, Pelias articulates toponyms classes both vertically (administrative boundaries, mainly hierarchical nesting) and horizontally for context dependant toponyms (within a country, or for a given language: such as vernacular names, campus names, borough in a city, direction… when having different names for the same original geographical object). This requires a large graph with connected classes. They are detailed in WhosOnFirst’s ontology, which has been designed to understand “Where things are (and what they mean)”.

For the remaining ambiguities (e.g. when having “Paris” without any other information), the geocoding engine is using external variables (popularity criterium, such as number of inhabitants) to decide which candidate is the best (e.g. and to choose “Paris, France” instead “Paris, Texas, USA”).

We are promoting this two steps approach (classification step and comparison step), with four options to fit the needs of the researches conducted by our users: from meso scales (e.g. regional level) to smaller geographical spaces (e.g. building names, streets or neighbourhoods).

As detailed below, the address field should contain at least a country name. Ideally, country names should follow ISO standard, even if CorText geocoding service works also with a set of country name aliases. The country name is used as a pivot to filter candidates, and improves drastically the quality of results.

Organisation names, street names, person names and postal boxes are removed in order to reduce ambiguity (e.g. for multi-located compagnies or laboratories), and to retrieved more aggregated geographical information. Addresses can be located from the postal codes scale (sub-city scale) to urban areas and metropoles (sub regional scale, as for county). This method is opportunistic as it takes less ambiguous information first (postal codes), to end with more ambiguous (city names, and finally building and street names). Depending of the tagged elements in the address, the geocoding engine will decide which candidate and scale are the best. This method is made to cover a large variety of situations with a good quality of the results.

Tagged addresses will be searched in the specific sub-area (meso area as regions or counties) and retrieved coordinates as frequently as possible at the city scale. It tends to reduce the variety of geographical objects retrieved and to narrow the scales of the results on centroid coordinates of cities. This method is useful to build analysis at the city or regional scale.

tagged addresses will be searched in the specific sub-area and retrieved with a very fine-grained toponyms or building names (and POI) detection. Street names, building names are prioritized. It needs a well and uniform full addresses coverage (with street names and/or building names) and fits when follow precise intra-urban local spatial dynamics. It tends to produce a spread spatial distribution of the coordinates.

Full addresses are sent without any customisation (no pre-processing step, no toponym filter, no prioritisation of the scale) to the geocoding engine and let it decide which geographical object is the best. 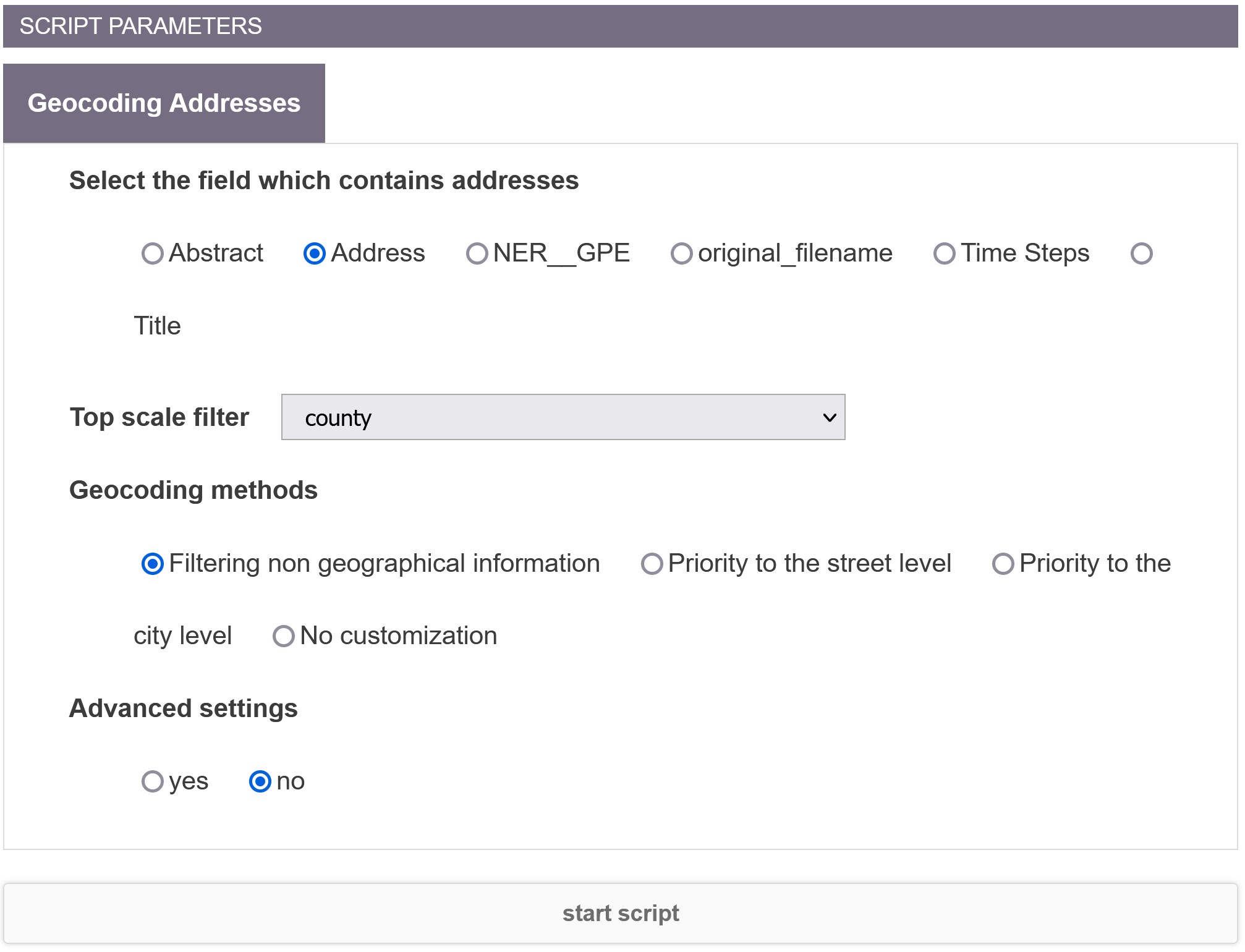 Select the field which contains the list of address. It should be formatted a least with a city name and a country name (e.g. “Paris, France”). Ideally, country names should follow ISO standard. As the country boundaries are an important information to locate addresses, CorText Geocoding service is able to deal with aliases for country names (e.g. USA, US, United States of America). When needed, intermediary names (state, region, county….) are also useful to help reducing ambiguities. Postal codes (but not postal boxes) are powerful and non-ambiguous information and are supported for 11 countries: Austria, Australia, Canada, Switzerland, Finland, France, Great Britain, Japan, Liechtenstein, Netherlands, United States of America. For a higher accuracy, please consider removing postal codes for countries which are not listed.

Addresses won’t be geocoded above this scale. If having centroids at the “region” scale is not an option, “county” will provide a better precision. For an address geocoded at county or city scales (or even below), all the adminsitrative hierarchy is calculate based on the founded coordinates (including city, region and country names) and added to the final results.

Choose which geocoding method to use according to your needs. See the above definitions. “Filtering organisation names” is recommended as it will provide the best ratio between the quality of the results and the coverage. As geocoding addresses is slow, “Filtering organisation names” is also the fastest option (e.g. 4 days for around 2 millions of addresses). To expand the coverage you could consider to choose 0,4 as a “Confidence threshold“. It will also increase the proportion of false negatives.

Depending the method chosen, users will get different results. The Cortext Geocoding engine is not only able to geocode your addresses (longitude and latitude coordinates), but also enrich your corpus with three new variables that can be used in other CorText scripts:

Depending on the lowest layer found (directly or by fallback) during the geocoding process, the completeness of the variables added to the dataset may vary. See below how geo_city, geo_region, geo_country are built according to the layer.

When toponyms come from Named Entity Recognizer script an extra step is added before geocoding the extracted toponyms: checking if the ids are unique. Since the NER, Term Extraction and Corpus Term Indexer scripts, are designed to extract terms and build co-occurrences from texts, they store a distance value (e.g., to exclude links between terms when they are too far in the original texts) where ids may not be unique when these terms are close to each other. The geocoding process need a unique link between toponyms and documents. So, a new variable is created which is a copy of the original variable:

This new variable is used to store the list of toponyms which could be refined through GeoEdit tool.

This example uses a 3D printing dataset with all scientific publications published in a given time period.

In the map “purdue university” is a location in US where the university is located next to the city of Lafayette in the state of Louisiana (around 2 kilometres from the 127,657 inhabitant city, according 2015 U.S. Census estimates). In CorText Geocoding Service, this location is considered as an independent geographical object (with its own postal code, where administrative boundary of the university does no overlap the boundary of the city of Lafayette). The other locations mentioned onto the map are city names, even if the coordinates of the locations found (longitude and latitude) are under the scale of these cities.

With the top 2 semantic clusters labels written next to the clusters, it is possible to estimate the thematic specialisation of geographic communities built on the top of authors collaborations in the 3D printing scientific field.

Section to expand with your comments.

Refer to this work

This set of methods have been funded by the European Union under Seventh Framework Programme RISIS.

If you have found the tool useful, we would be grateful is you would refer to this work by citing it in your own documents or publications: